DFCC Bank's brand story is unique. It has evolved, diversified and grown to meet the changing needs and aspirations of a resurgent economy, its institutions and its people.


Founded in 1955, DFCC Bank is one of the oldest development banks in Asia.


A unique institution; private sector in form but more like a public-private partnership in outlook, DFCC Bank was set up under an act of Parliament, to give rise to the post independent industrial growth through private sector participation.


Setting off to accomplish its mandate in unchartered territory, against a tapestry of changing political and economic scenarios, DFCC has for over half a century played an innovative and catalytic role in the development of the private sector with special support from the government which continues to date. DFCC’s role has not been confined to providing long term loans alone but one that has extended to capacity building and business facilitation.

DFCC Bank is proud to have been the wind beneath the wings of many trail-blazing entrepreneurs and enterprises in the country, particularly during their early and risky start-up stages. Today many of them are leading players in sectors such as agriculture, apparel, construction, food and beverages, healthcare, manufacturing, power, telecom and tourism.

The Bank has been a true pioneer, daring to lead the development of key sectors such as small and medium enterprises, resort hotels, mobile telecommunication and more recently renewable energy. The Bank also ventured into new and complementary areas of business such as investment banking, unit trusts, stock broking, venture capital and industrial estate management.

With its original mandate still high on the agenda, DFCC Bank continued into the new Millennium with a paradigm shift in its business model. New subsidiaries engaged in Consulting and IT services were launched and the investment banking business was re-engineered through a joint venture to be a fully fledged universal investment banking group.

The defining moment in the last decade was the launch and development of DFCC Bank’s commercial banking subsidiary named DFCC Vardhana Bank. A unique two banks in one structure transformed DFCC from a single product bank that only connected with businesses, to a bank that also catered to individuals from all walks of life. A portfolio of enhanced personal financial services asset and liability products was designed and introduced.

Throughout its journey DFCC Bank never lost sight of its special role in the development agenda of the country. It continued to be in the forefront of sustainable development financing being a net transferor of financial resources especially to the provinces, transforming rural economies and thereby supporting livelihoods, employment generation and capital formation. The small and medium enterprise sector is the key driver of this transformation and DFCC remains committed as always to the development of this sector.

Over the years, DFCC has evolved, diversified and grown to meet the changing needs and aspirations of a resurgent economy, its institutions and its people.

In January 2015, DFCC became a Public Quoted Company incorporated under the Companies Act No. 07 of 2007, transforming into DFCC Bank PLC.

In October 2015, in a landmark event in Sri Lanka’s banking and financial sector, DFCC Bank PLC and its subsidiary – DFCC Vardhana Bank amalgamated to form a fully-fledged commercial bank supervised by the Central Bank of Sri Lanka. The joint synergies and the combined development banking and commercial banking resources of the merged entities, strengthen and position DFCC Bank PLC as a force to be reckoned with in the financial services industry. The combined entity offers a full range of banking services across all economic sectors and geographies in the country, with sustainable value creation as a core objective.

As a financial services group, DFCC Bank PLC continues to grow and draw synergies from its complementary areas of business such as investment banking, unit trusts, stock broking, venture capital, industrial estate management, consulting and IT services through its subsidiaries, joint venture and associate company.

DFCC Bank delivers its services through 139 branches island-wide and customers are served by over 2000 plus dedicated employees. Our customers have access to over 4,500 ATMs across the country via the LankaPay ATM network and can avail themselves of the Bank’s services via online and mobile banking and DFCC MySpace, the Bank’s self-banking solution. 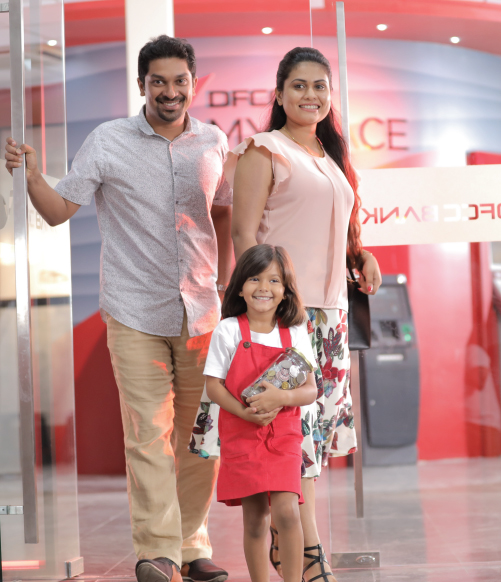 What does the future hold?

DFCC Bank was developmental by design;
but resilient by choice;
and are staying relevant for the future…

The Bank will remain focused on developing individuals and businesses to grow through innovative and responsible financial solutions that lead to sustainable progress and prosperity for all.
Let’s keep growing…